The Net-Zero Task Force are creating an evidence-led Devon Carbon Plan which will consider the earliest, credible date which should be set for net-zero emissions. 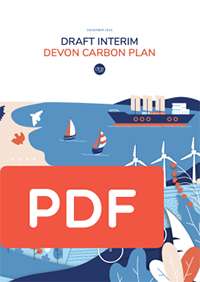 Who the action is relevant to

Devon has distinctive qualities and characteristics that provide the context for planning for Net-zero emissions.  Devon is largely rural in character, with rural areas accounting for 90% of its land area; it has over 200 miles of shoreline split between two separate coasts north and south, and it is the third largest of the English counties. However, Devon also has major urban centres, the three largest of which – Plymouth, Torbay and Exeter – account for almost half of its population.

Devon is also recognised for landscapes of national importance; 35% of Devon’s land area is within Dartmoor and Exmoor National Parks together with five Areas of Outstanding Natural Beauty. There are also two World Heritage Sites (the Cornwall and West Devon Mining Landscape and Jurassic Coast) as well as the North Devon Biosphere Reserve and an International Dark Skies Reserve.

The county’s biological and geological diversity is illustrated by the presence of over 200 Sites of Special Scientific Interest (SSSI). There are also over 2,100 County Wildlife Sites and over 360 County Geological Sites. However, Devon’s habitats have become increasingly fragmented and are vulnerable to development pressures and the effects of climate change. More information about the health of Devon’s environment is available in Natural Devon’s State of Environment Report.

Figure 7 illustrates the Gross Value Added (GVA) economic profile for the Devon, Plymouth and Torbay area compared to that of the UK. Devon has a higher GVA percentage in agriculture, construction, real estate and the public sector but has a lower prominence of information and communication, financial and insurance activities and professional and administrative activities.

This diversity in geography and economic structure means that the challenges of reaching Net-zero will vary between different parts of The County as well as between sectors of its economy. For example, a Net-zero future will look different in Exeter compared to that of villages in Torridge or coastal towns in the South Hams. The challenges of Decarbonisation vary and so do the opportunities, but all areas of Devon need to fully contribute, respecting their individual identities, to creating a resilient, Net-zero carbon Devon where people and nature can thrive.

1 GVA is a measure of the increase in the value of the economy due to the production of goods and services.

Figure 8 shows Devon’s production Greenhouse Gas (GHG) emissions in 2018 (including Plymouth and Torbay), which is the latest available emissions data. ‘Production’ means these data reflect the GHG emissions that arise from activity within the boundary of Devon. The total emissions for Devon, Plymouth and Torbay was 7,848,649 tonnes of carbon dioxide (CO2) equivalent in 2018. This reflects the effect of the emissions of a basket of six GHGs on global warming, converted into equivalent units of carbon dioxide. The most substantial emitters are Buildings, On Road Transportation and Agriculture. These are discussed in more detail later in this Plan.

Aviation and marine emissions (estimated to be 2% and 0.3% respectively) are not included in Figure 8 as data availability and quality is poor. Further details on the methodology used to produce this figure can be found here.

The local authorities’ emissions vary depending on whether the location is predominately rural or urban. For example, Exeter, Plymouth and Torbay have lower transport emissions as they are predominantly urban; urban residents tend to be in closer proximity to amenities and therefore can walk, cycle and use public transport for a higher proportion of journeys than those in rural areas. Urban areas tend to be on the gas grid whereas dwellings in rural areas are more likely to rely on oil, and gas is a lower carbon fuel. Furthermore, rural areas have higher emissions from agriculture, which are the result of food and fibre production for local populations, those in urban areas and national markets. Conversely, manufacturing and other industrial processes tend to be located in urban areas, so these areas have higher
emissions associated with these activities. These differences can be seen in Figure 9.

Due to this difference in how GHG emissions are produced across Devon’s geographies, a Net-zero future will look different across Devon. This diversity is reflected in the actions in this Plan, which are spatially tagged to reflect the location types for which they are most appropriate.

3.2.2 We are not starting from scratch

Between 1990 and 2018, the UK’s GHG emissions produced within its borders (territorial or production emissions) have reduced by 43% partly as a result of national policies to encourage decarbonisation25 and the transition of the UK’s economy away from domestic manufacturing towards the service sectors.

Although figures over this duration are not available for Devon it can be assumed that similar reductions have occurred locally. Since 2010, Devon’s production GHG emissions have reduced by 20%,26 meaning that Devon is almost halfway to reducing emissions by 45% from 2010 levels by 2030 as recommended by the Intergovernmental Panel on Climate Change.

International trade means that many of the Greenhouse Gas (GHG) Emissions associated with Devon’s citizens’ day-to-day lives are not emitted within Devon itself but instead occur overseas. For example, purchasing a mobile phone causes 55kg of GHG emissions across minerals extraction, manufacturing, distribution, and point of sale in the UK – but only the emissions27 associated with the distribution and resale in Devon appear in Devon’s production GHG emissions. These overseas emissions are referred to as ‘consumption emissions’ to distinguish them from production emissions. In 2017 (latest available data), the proportion of the UK’s total GHG emissions accounted for by imports was 46%.28  Therefore the UK GHG emissions calculated on a consumption basis are almost double those calculated on a production basis.

The Devon Climate Emergency partners have currently agreed to work to reduce Devon’s consumption and production emissions to Net-zero by 2050 at the latest. Prominent policy scenarios for achieving Net-zero emissions in the UK, such as those produced by Committee on Climate Change 22 and The Centre for Alternative Technology 28 only address production emissions and so this commitment from local partners is ambitious.

Consumption emissions should decline to Net-zero around 2050 if the future UN Conference of Parties (COP) reach agreement to achieve Net-zero global emissions by 2050. However, this requires poor countries to reduce their emissions within the same timescales as rich countries, which has been criticized as unjust and an obstacle to agreement. The Glasgow COP in 2021 will be critical.

Be part of DCE